Amanda Seyfried was all smiles as she enjoyed some downtime with her husband, Thomas Sadoski, and their friendly dog, Finn, earlier on Friday.

The couple were pictured taking a break from filming the upcoming anthology series, The Crowded Room, in New York City.

The Dropout actress, 36, and The Newsroom alum, 46, tied the knot in a small, intimate ceremony in 2017, two weeks before welcoming their daughter, Nina. The stars also share a one-year-old son, Thomas. 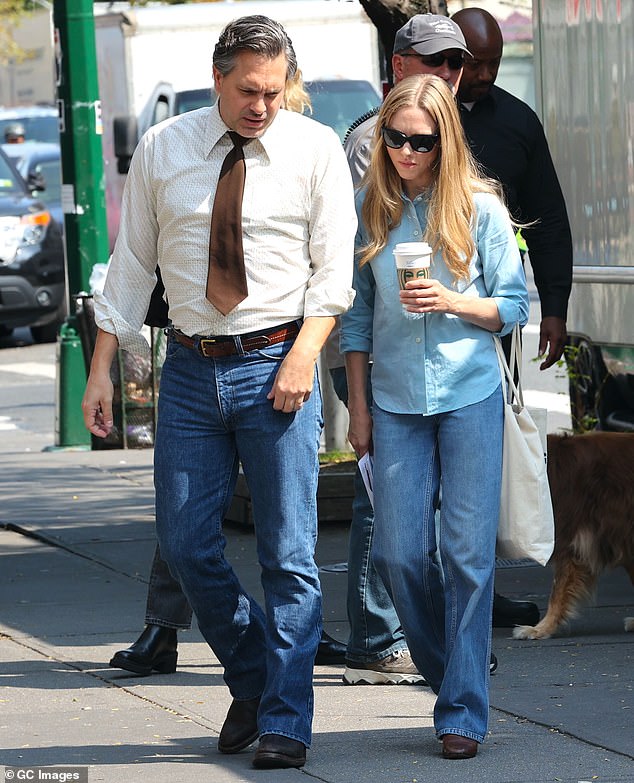 On set: Amanda Seyfried, 36, and her husband, Thomas Sadoski, 46, were seen relaxing on the set of upcoming series, The Crowded Room on Friday in New York

Both Amanda and her husband were dressed casually for their long day of filming together.

She donned a pair of brown heeled loafers to complete her look before shooting some important scenes. Her blonde hair was parted in the middle and fell over her shoulders in long, sleek waves.

The mother-of-two was seen holding a large Starbucks mug as she sipped on a delicious cup of coffee to keep herself energized for work. 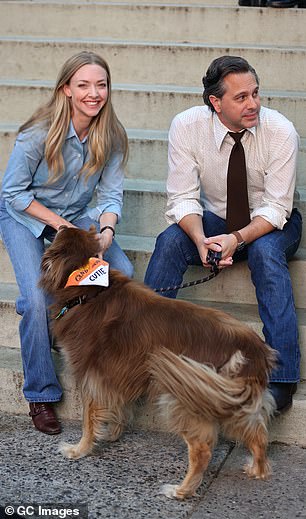 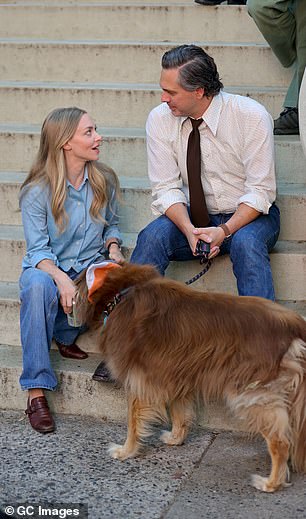 Cute: The couple were pictured relaxing outside with their friendly dog, Finn, as they waited to film their scenes for The Crowded Room 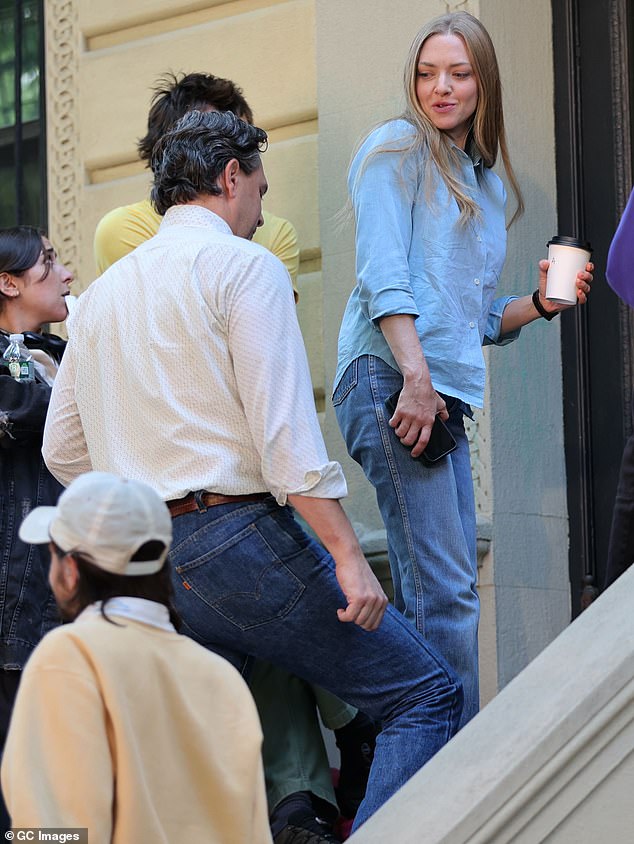 Having fun: The two stars appeared to be spending time together on set after recently attending the 2022 Emmy Awards on Monday in Los Angeles

He had on a white button-up shirt tucked into the waist of his pants, which was fastened with a brown belt. The Life In Pieces actor added a brown tie with black shoes to complete his look.

After grabbing a cup of coffee, the couple were pictured relaxing on concrete steps outside while spending some quality time with their furry friend Finn.

Their adorable pooch had a white and orange bandana with the word Cutie printed on the fabric. 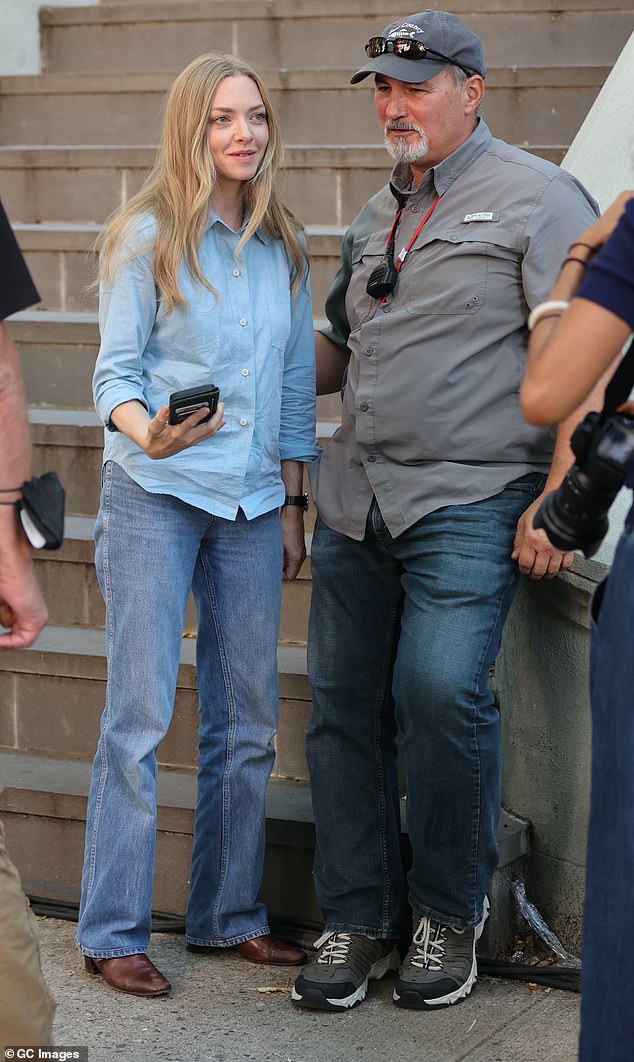 Getting ready for a scene: The actress was seen chatting with one of the crew members on set 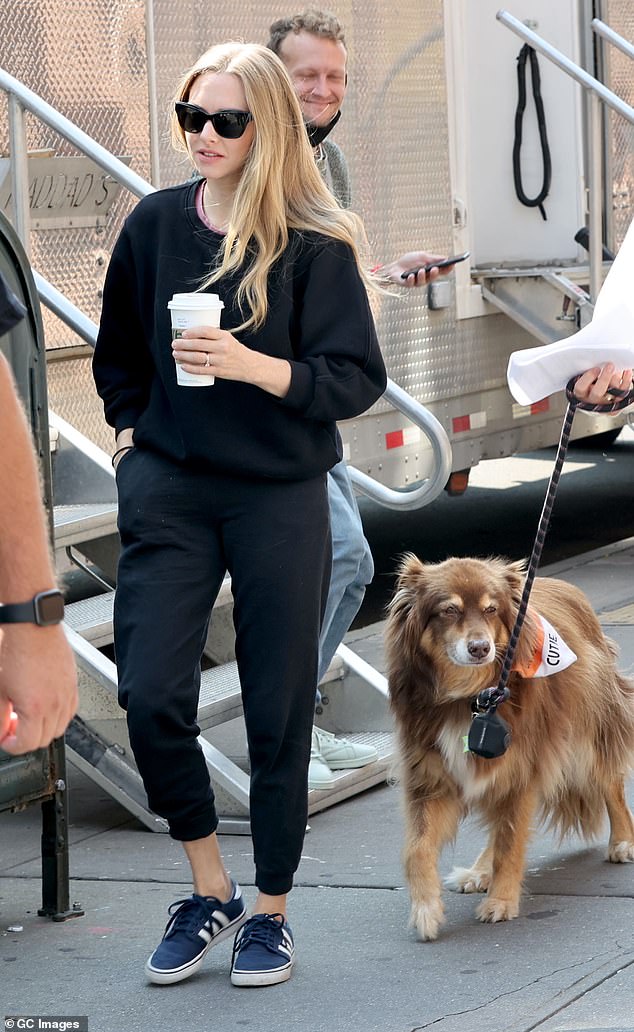 Arriving on set: Before changing into her character’s costume, Amanda was seen wearing black sweatshirts and a matching sweater with Finn walking beside her

The Crowded Room isn’t the first time Amanda and Thomas have worked together on set.

The two lovebirds first crossed paths in 2015 while working on the off-Broadway play called The Way We Get By. At the time, the two stars were in other relationships, but developed a friendship as co-stars.

A year later, the actors were cast again for the same film, The Last Word. The two had previously ended their relationship and started dating, only to get engaged later that same year in September 2016.

The two tied the knot in a private wedding in 2017 and welcomed their first daughter a few weeks later. In 2020, their son was born. The couple currently reside on a farm in upstate New York.

Amanda and Thomas made a glamorous appearance at the 74th Annual Emmy Awards held in Los Angeles on Monday. The actress received her first Emmy for Outstanding Lead Actress in a Limited or Anthology Series for her performance in The Dropout. 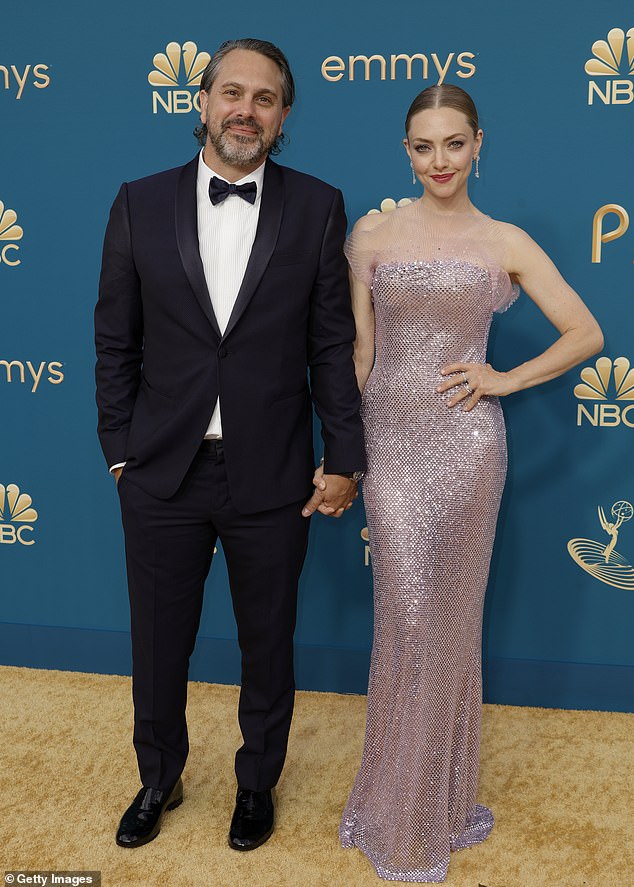 Huge supporters: The two stars seem to support each other and were seen arriving hand in hand at the 2022 Emmy Awards on Monday 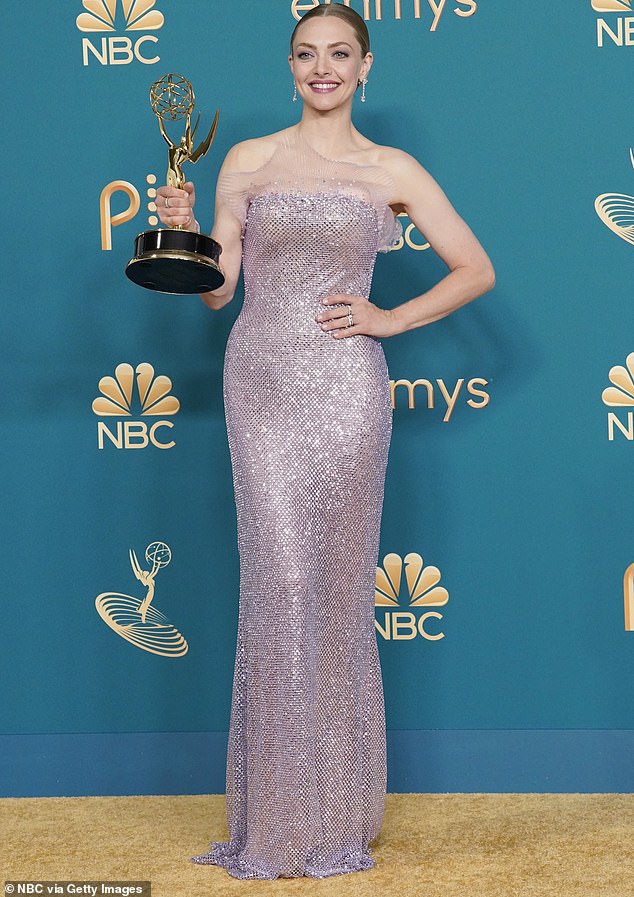 Monumental moment: Amanda received her first Emmy Award for Outstanding Lead Actress in a Limited or Anthology Movie or Series for her role in The Dropout

The Mamma Mia actress will appear on screen again in the upcoming drama anthology series with Thomas.

The planned show’s premise follows an “inspirational story of people who have struggled and learned to live with mental illness,” according to IMDB.

The plot is also based on the non-fiction novel, The Minds Of Billy Milligan, written by Daniel Keyes. The official release date for the Apple TV+ series has yet to be confirmed. 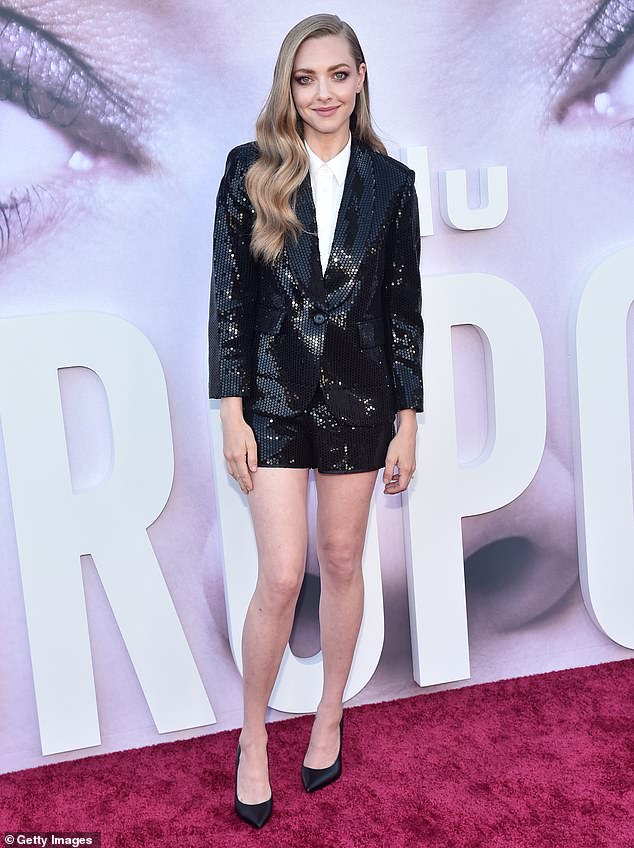 Talented: Amanda has acted in many films throughout her career, from dramas to musicals such as Mamma Mia; seen in June in Los Angeles