A tide of trash has washed ashore at a tourist hotspot as travelers turn a scenic beach into wasteland in footage released by a man dressed as a superhero who tried to help clean up.

Holidaymakers flocked to Kuta Beach on Bali’s south coast in December hoping to soak up the sunshine and festive atmosphere during the festive season.

However, a video emerged on Tuesday showing the once pristine beach covered in piles of rubbish, including plastic bags, discarded cups and general trash.

The video, shared on Instagram by Suzuki Hiromasa, shows dozens of volunteers cleaning up the beach on December 25, while a front-end loader picks up trash along the shore.

Mr Hiromasa is seen dressed in the costume of ‘Ultraman’ – a Japanese superhero – as he helps pick up ‘600 tons’ of rubbish left behind by tourists. 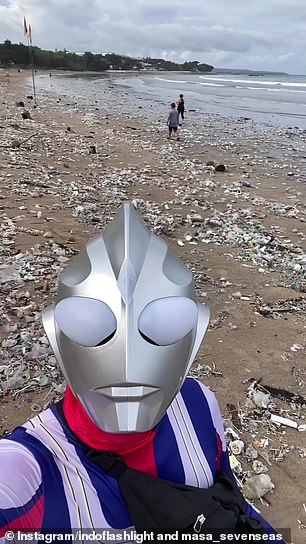 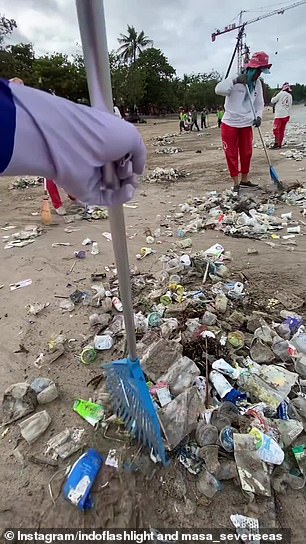 Footage shows Kuta Beach on the south coast of Bali covered in piles of rubbish. Japanese national, Suzuki Hiromasa, is seen wearing an Ultraman costume as he cleans up trash left behind by tourists (left and right)

The Japanese national is an environmental activist who travels to Bali twice a year to clean up trash.

“As the end of 2022 approaches, Kuta Beach in Badung Regency, Bali, has again been overrun with truckloads of rubbish,” Mr Hiromasa wrote.

“The litter that litters Kuta Beach is dominated by plastic waste, ranging from plastic cups for mineral drinks to plastic packaging.”

Mr Dwipayana said that so far the volunteers have collected 600 tonnes of waste from October to December.

‘A total of 600 tons. It’s all on the … coast of Badung Regency in the west,’ Mr Dwipayana told CCN Indonesia.

Mr Dwipayana said Bali’s waste problem is expected to peak in January due to the rainy season and the influx of tourists.

Seasonal winds and heavy rains between December and March force the waste to flow into the regency’s rivers before accumulating on the coastline. 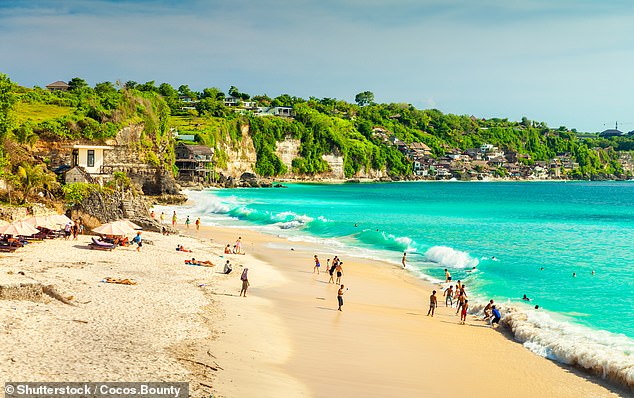 The previously pristine beach is a hotspot for vacationers who flock to the destination to soak up the sun and soak up the party vibe (pictured, Kuta Beach, Bali) 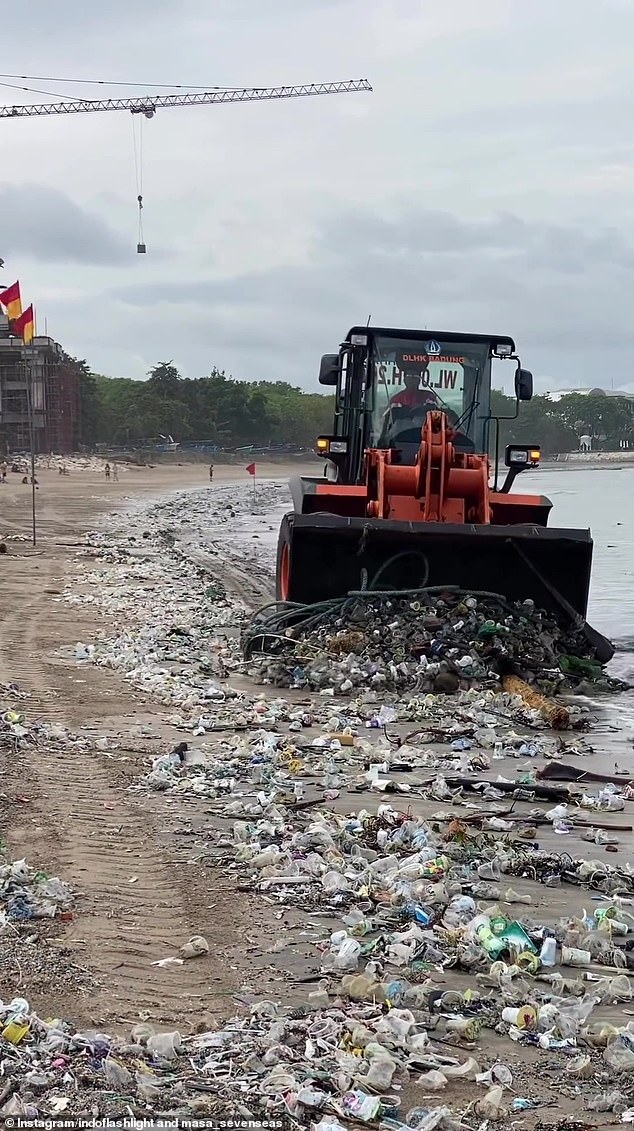 More than 100 volunteers and four front loaders (pictured) were sent to Kuta Beach to clean up the rubbish. An estimated 600 tonnes of rubbish washed up along the entire Bali coastline from October to December

Mr Dwipayana said his organization had mobilized around 400 people – 100 of whom were sent to Kuta Beach with four tractors – from the 10 coastal areas.

Waste in Bali is increasingly an issue, with Indonesia recording 68.5 million tonnes of waste in 2021.

The data, collected by the Department of Environment and Forestry, revealed that 17% of litter in Indonesia was plastic waste, of which only 9% was recyclable.

Mr. Hiromasa said he deliberately wears the Ultraman suit to attract public attention and hopes it will inspire others to do the same and clean up the world’s oceans.

‘Start with yourself, then share this information with others. Hopefully, we can all protect the environment by avoiding littering, whether on roads, oceans, rivers, etc.

Photo of Tarek Zahed: Comancheros cyclist seen in public for the first time since the Sydney gang shootings