Jordyn Woods seems to be out shopping after Christmas.

And while I was out on Wednesday, Kylie Jenner’s former best friendposted a series of snaps of herself in various stores with her prized Hermes Birkin handbag taking center stage.

While the Hermes Birkin is considered a status symbol for many, costing nearly $20,000, that day the reality TV star used the luxury bag to carry a large pretzel she had just purchased. 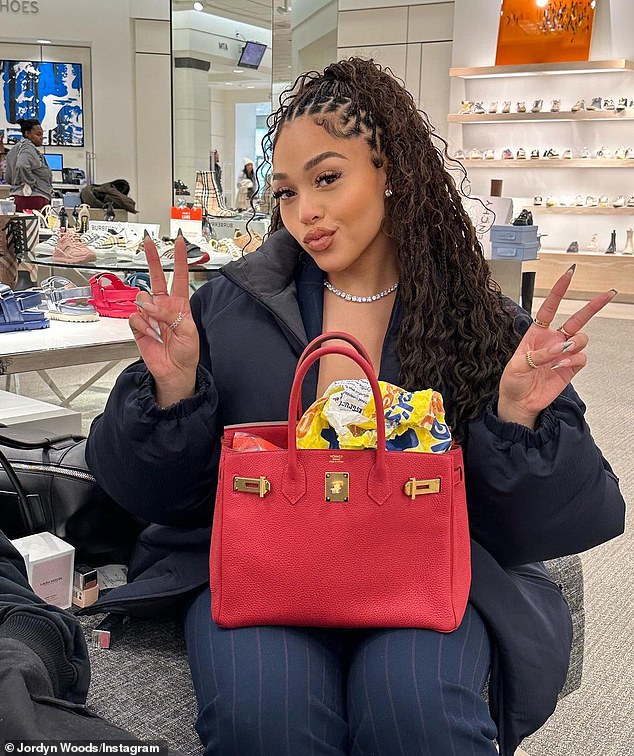 Expensive bag: Jordyn Woods, 25, displayed peace signs while shopping after Christmas, which included using her nearly $20,000 purse as a way to carry a large pretzel

Playing on the dichotomy between the purse and the pretzel, Woods took to the caption of her Instagram post and joked, “I’m just here for the pretzels.”

The cover photo shows Woods sitting in a chair in a department store, bundled up in a black puffer jacket with her Hermes Togo Birkin 30 Rouge Casaque sitting between her and an apparent friend.

The yellow and white bag covering the large pretzel can be seen sticking out from the top of her luxury handbag.

She would go on to make her expensive bag the centerpiece of six of the seven photos she shared on Instagram. 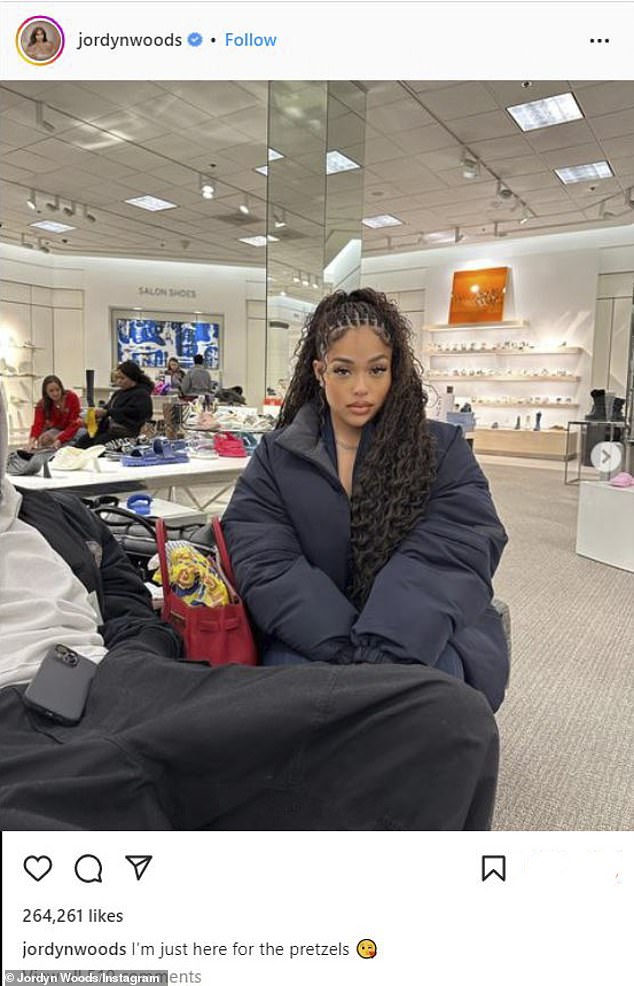 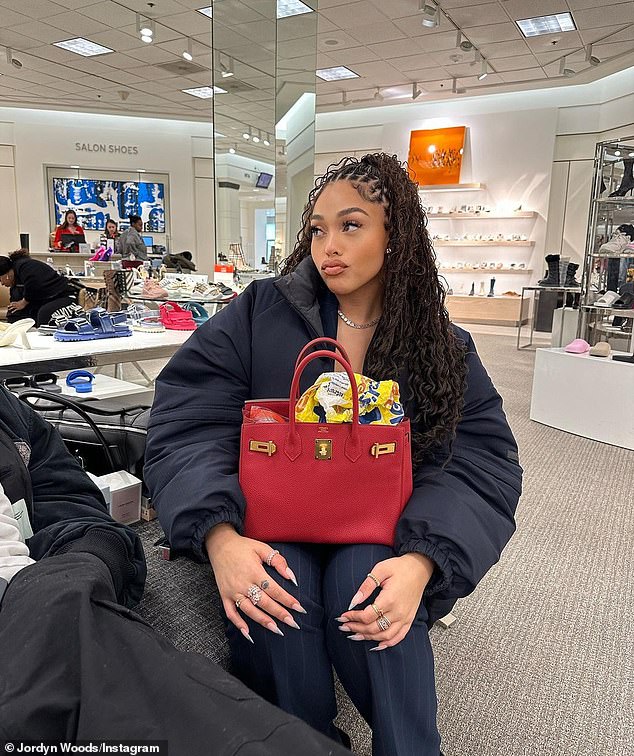 Precious possession: The reality TV star showed off her expensive luxury bag in six of the seven photos she shared on Instagram on Wednesday

Woods could also be seen standing in a hallway, apparently in a mall, holding her chic accessory as she posed looking directly at the camera.

At one point, she removed her heavy winter jacket to reveal her blue pinstripe pants and matching crop top, which she teamed with red, white and blue Nike sneakers.

The Los Angeles native turned her face forward in another photo that showed off the plunging neckline in the set, which helped highlight her many assets.

For her shopping day, Woods had her dark tresses styled in braids in the front and on top of her head, but pulled into a high ponytail, which still flowed past her waist. 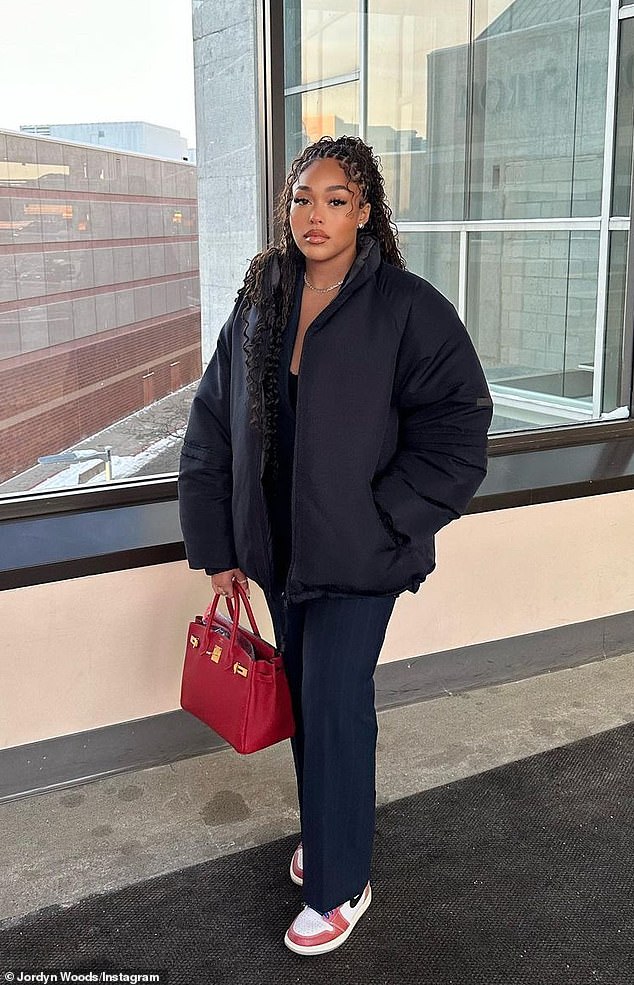 Shopping after Christmas: The Los Angeles native held her Hermes Birkin handbag as she struck another pose 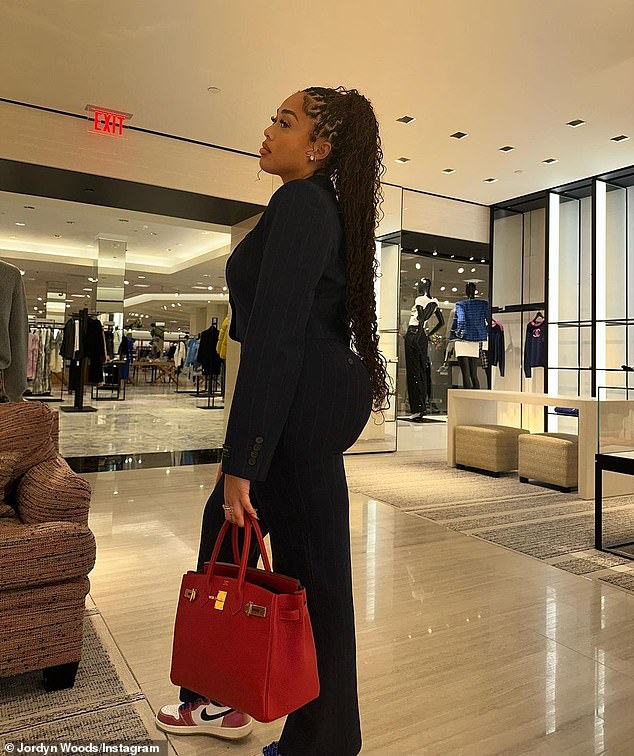 Stylish: At one point, Woods stripped off her heavy winter jacket to reveal her blue pinstripe pants and matching crop top, which she paired with red, white and blue Nike trainers

Hermes Birkin bags are handcrafted in leather and named after the English-French actress and singer Jane Birkin.

Luxury handbags are popular among collectors and over the years have become a symbol of wealth due to its exclusivity, high price and long waiting lists.

Woods’ Hermes Togo Birkin 30 Rouge Casaque, and its price tag of nearly $20,000, is made of red grained calfskin. The bag features buckled leather top handles, a cross flap and strap closure, and a gold plated twist clasp. This opens to a matte goatskin interior with zipper and patch pockets. 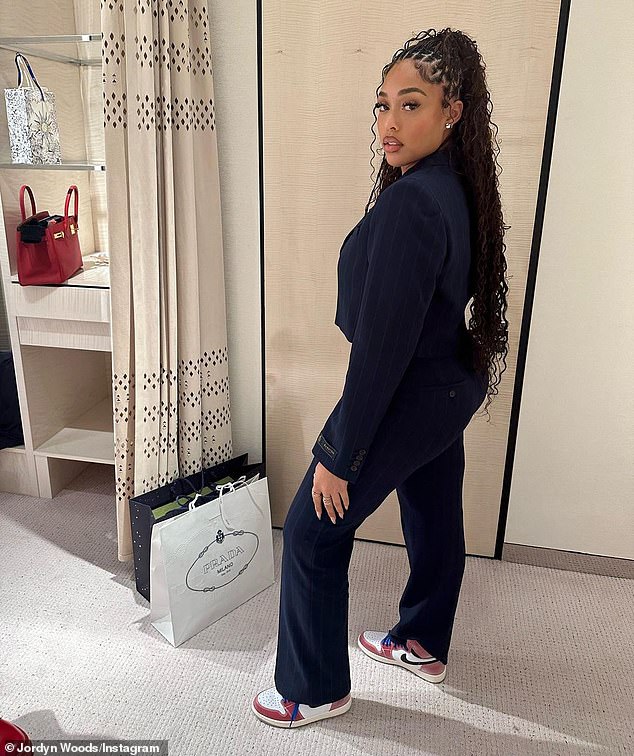 Entrepreneurship: Just before Christmas, Woods went public and announced that she was launching her own brand

Just before Christmas, Woods went public and announced that she was launching her own label.

“Entrepreneurship is hard, I’ve had businesses in the past and you learn as you go, but I really put this one on my back,” the model shared in an Instagram post on December 19. . ‘Excited for this journey,’ she ended the post, while urging her followers to ‘stay tuned’.

So far, Woods has only revealed she’s launching “a brand.” It is unclear if this means a specific type of clothing, shapewear or accessories.

After being recognized as one of Kylie Jenner’s best friends, the former pals fell out when Woods was accused of kissing Khloe Kardashian’s baby daddy, Tristan Thompson. Work: After stripping off her winter coat, Woods posed in her blue pinstripe ensemble of pants and a matching crop top with a plunging neckline

Is Vera Pauw still married to her husband? Family, Children, Net Worth and Salary

Hailey Bieber, Justin and Kendall have dinner with Kendall Jenner