Falling through a thick rush of black attire adorned with proud “Still A Freak” proclamations, Ball Arena was overrun Tuesday night by the impenetrable mass that is the Korn fanbase. Although it was far from the spectacle we expected (and still hurt our necks), every step of Korn and Evanescence in Denver was intentionally triumphant. It was nothing if not a hellish way to kick off a tour.

Opening act Jeris Johnson opened the show, taking command of the room like a drunken frat boy who’d stolen the microphone and smashed his way onto the stage with a broadsword – then refused to abandon his post. Among a sea of ​​diehard metal fans, Johnson’s performance felt like a parody, with a stagnant crowd that indicated the tension of the sickening, highly organized performance. Claiming it was only his second tour, the vast majority of Johnson’s set was sampled in his own genre – Slayer, 3 Doors Down, Papa Roach and even the name of the night, Korn. To be fair, the metal is in such a saturated recipe that it’s hard for anything but the creme de la creme to rise above the wash of conformity. And familiar hits riled the crowd enough for the headliners to launch into their bidding.

And even as an artist with little touring experience, he managed to achieve his goal as an opener – Johnson’s music mixed new lyrics with fan favorites, ensuring that audiences who don’t had never heard of him could sing for the duration of the set.

Rolling throughout the thrilling night, Evanescence took the stage. Or, more accurately, took to the arena with equal parts intimidation and grace. The signature siren voice of Amy Lee – who led the charge – tends to seep into skin cells, even after nearly 20 years on tour. Its vocal chords have the unique ability to lift the heart of anyone listening as the sustained notes overwhelm you. The return to metal and hardcore music was a great renaissance – it really wasn’t “just a phase”. The band played with skillful precision. The pristinely syncopated drumbeats were Lee’s only sonic rival, vying for attention even as the most lyrical metal vocal in recent history garnered attention. Racing around the state with relentless energy, the band took advantage of the three-tier setup, rarely stopping to breathe before heading into the next track. 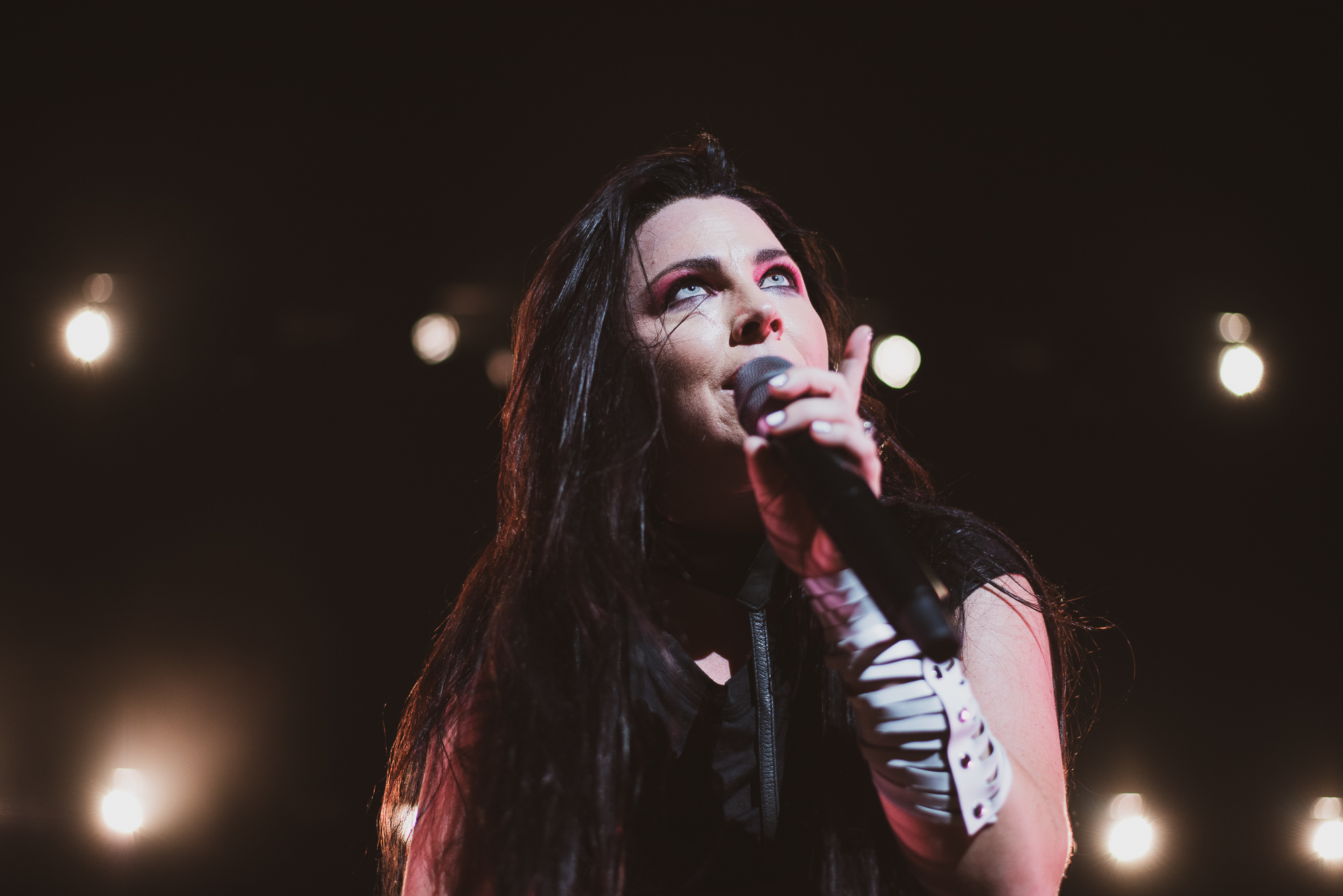 Classic songs like “Call Me When You’re Sober” and “Bring Me To Life” have grown men thrashing about in uncontrollable excitement as the feeling of something both propelling your body and leaving it erupts. is installed – the only remedy for which to pump limbs and neck pain. Evanescence’s glorious stage presence made every song feel like a big ending moment. However, although it drew cheers and applause from the crowd, the performance failed to lift much of the audience from their seats or inspire them to go beyond their thumps. rhythmic head. Despite the relatively docile demeanor of the audience, a few die-hard fans in the audience couldn’t resist filming almost the entire set (So if you didn’t have a ticket, don’t worry, it’ll probably make it onto YouTube ).

Sometimes it feels bad to see a metal show in an arena – hardcore music, especially live, acts as a threat to its listeners, struggle as the crowd fights back. It’s nearly impossible to capture that level of intimacy in a room as large as Ball. But when bands are as big as Korn and Evanescence, only a capacity of 20,000 could hold their raucous fans. And last night, despite comedic lineups and spatial challenges, the audience came together. While we waited for Korn, two separate groups in the pit began building cup snakes, drawing the attention of the arena as we all watched the precarious cup towers grow. Everyone burst into cheers as the two halves of the snake finally made their way through the crowd and came together in a much-anticipated union. And even though the cup snake eventually met his death somewhere in the pit, fans were entertained throughout the change of set – the wave rippled through the arena as fans entertained themselves in mind-numbing expectation . 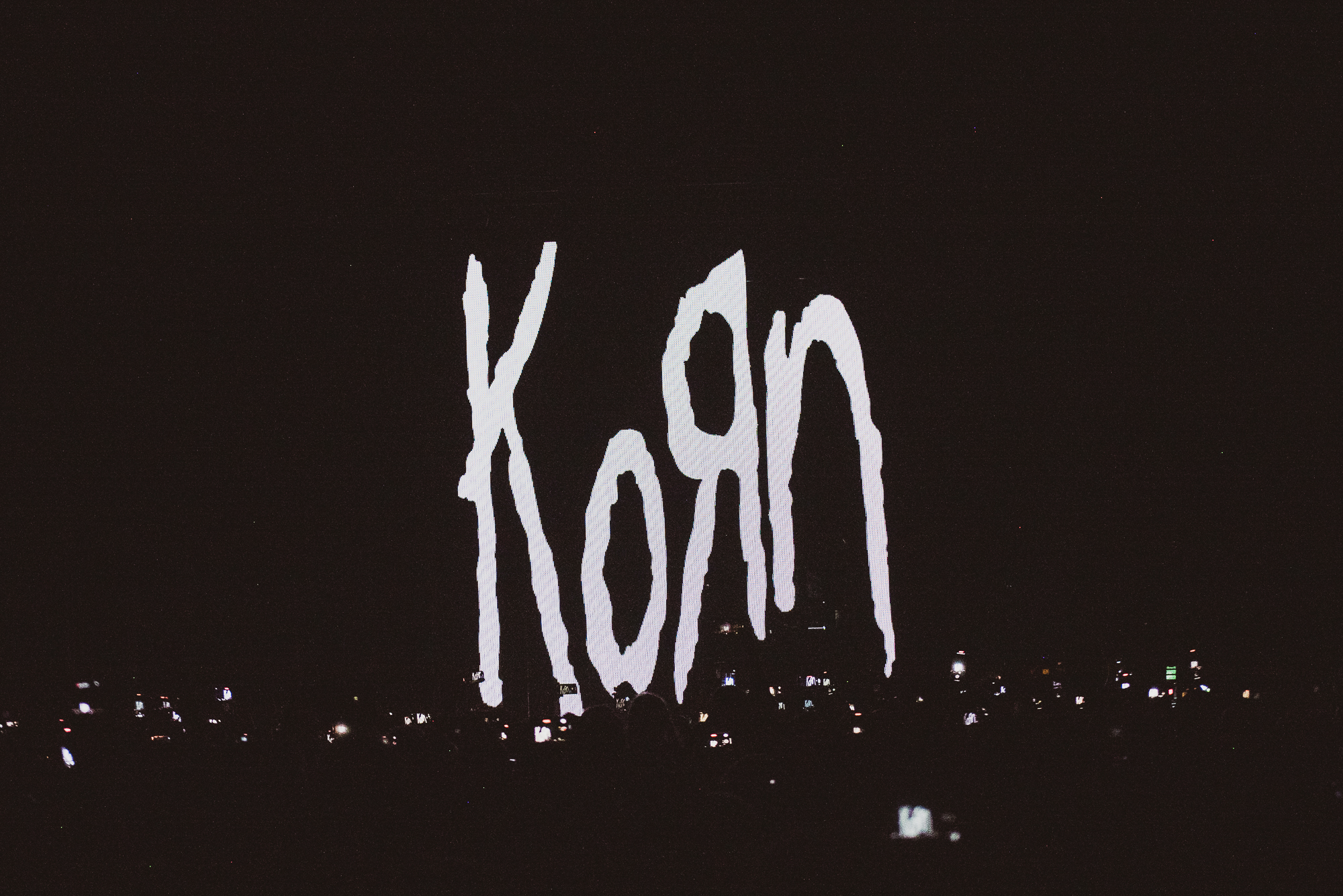 After anxiously watching a literal wall of metal bars being built at the front of the stage, a washing of hair and fists rushed over the opening highlights of “Rotting In Vain” as if to meet the caged wall imprisoning the quintessential hardcore showmen. The mosh pit quickly opened like an angry wound that refused to heal, leaving a good number of moshers dancing violently in the middle of the pit for the duration of the set, only slowing down to half speed with a change in tempo. , like moshing in slow motion. The pit became a living entity for over an hour, writhing on itself – flesh and spit and fingernail polish adorned hand gestures traversing the chaos. Crowdsurfing was unleashed on the third song as a true brick-and-mortar rock spectacle took its first breaths.

Jonathon Davis’ animal gargles have been driving frenzied excitement through the system and have been since the 90s. Tuesday night, her cracked voice and demonic ramblings brightened the mind of a distant Catholic girl while simultaneously causing a packed arena. Korn’s bold drum lines – making seductive use of 4/4 time – fueled the fire, sparking the signature lead guitar into action. Korn operates with the trust of the gods. And their fan base bows, singing along with every word, even bringing a cappella incited moments to their peak. Masters of tension and release in their music, guitarists James “Munky” Shaffer and Brian “Head” Welch bowed to their own chord progressions, banging their heads so hard their heads nearly hit the floor of the stage. 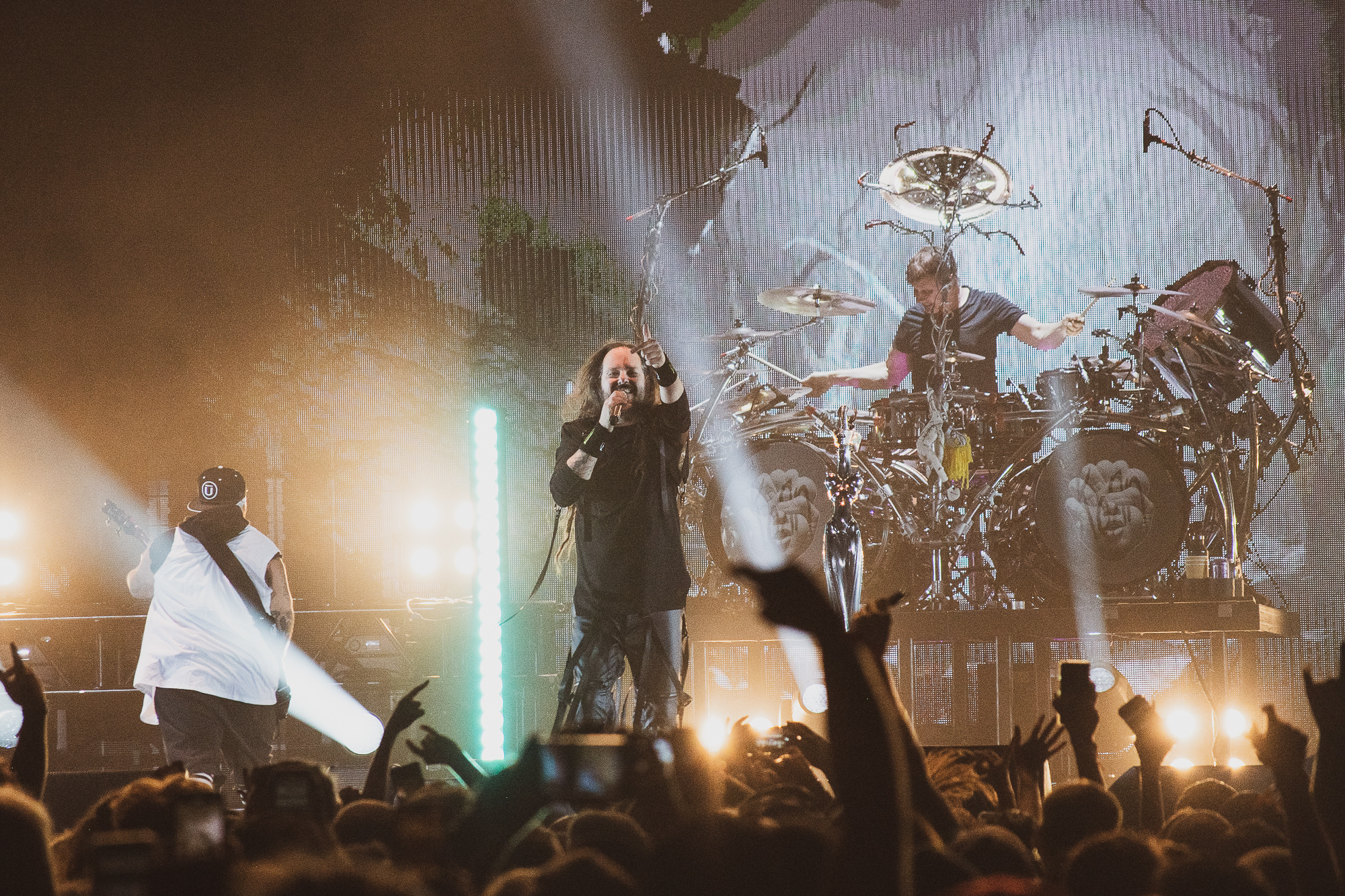 The iconic metal band has always been polarizing. But Korn doesn’t care about trying to impress anyone. They don’t need it. Korn pioneered nu metal, making an internationally recognized name. They have been doing things their own way, like it or not, for a very long time. The beauty of Korn’s often disturbing music is its inherent, awesome groove – it’s not your typical driving chords, all the time, every time.metal music of the time. So while the crowd knew what they signed up for, there was something for everyone throughout the night.

Although the encore is usually a consolation prize for being a good crowd, where the headliner has to play their obligatory hits, Korn’s thrown bone was just as epic and enticing as the rest of the series. Davis returned to the stage for a bagpipe soliloquy, commanding attention as he flaunted his new instrument and challenged the audience to raise the energy of the evening even further – and once the lyrics inspired by the recognizable nursery rhyme from “Shoots and Ladders” made its way out of the speakers, the crowd surged. Next, “Freak On A Leash” saw Lee return to the stage for one last fit of madness and harmonization with Davis.

The last deafening plunge of shouts from the crowd wrapped the show like a cozy blanket, bringing everyone home with pleas from the two headliners to come home safely. Everything that happened in the pit stayed in the pit. It was time to rest. 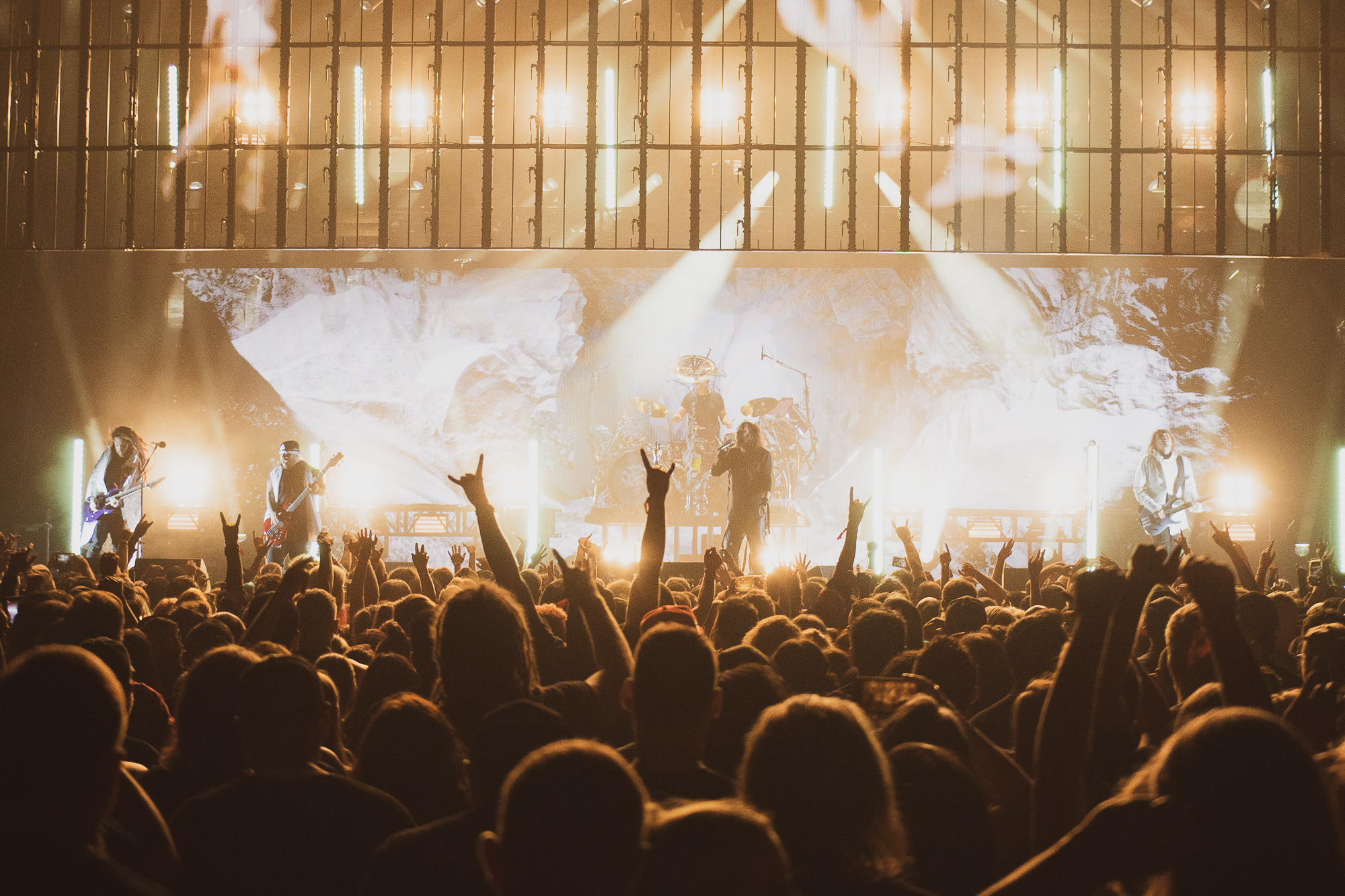 All photographs by Roxanna Carrasco. See the full gallery of the show here.

How healthcare workers helped me through the pandemic