Denver singles, we are thinking of you. Dating is hard these days, especially when you live in one of the worst cities in the country to find love. Even when you find that special someone – and by that we mean someone on a dating app who didn’t “move to Denver” as the most spontaneous thing they’ve ever done – first dates- you can be brutal. The pre-date Instagram harassment, the awkward little chat, the post-date anxiety rethinking every stupid thing you said.

UpDating, New York’s favorite comedy dating show, has all that and more. Better yet, you can do it on stage. Heading to Comedy Works Downtown on August 2, hosts Harrison Forman and Brandon Berman are bringing blind dates to life, and they want you to be a part of it.

Like many blind dates, Harrison Forman and Brandon Berman met through a mutual friend. Forman a producer and Berman a stand-up, the pair kept things platonic for a while, mostly pen pals bouncing content ideas back and forth. However, it wasn’t long before they decided to take the next step, asking that big question we’ve been waiting our whole lives to hear: do you want to host a dating show together?

A former trainee on the Howard Stern show, Berman was inspired by this style of comedy, fascinated by humor in the unexpected.

“I like watching backstage more than the front of the stage. I’m a lot more entertained,” Berman said. “I like all that shit that’s really raw, the idea of ​​not knowing what you’re going to see. “ 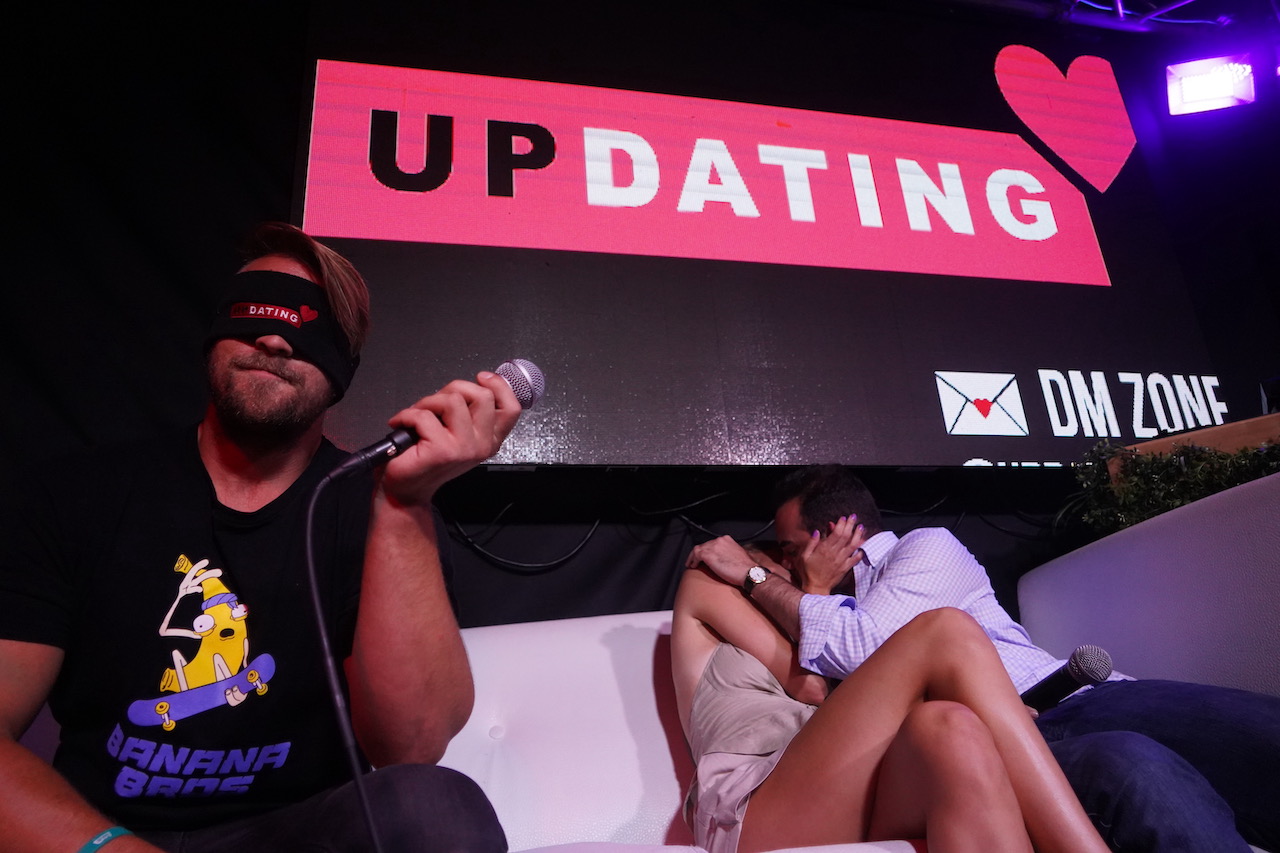 Forman was intrigued by the same, especially in the dating world. He started creating dating content, even broadcasting his dates on Facebook Live. It was through this idea that the couple discovered the world’s incurable obsession with other people’s love lives and, for some strange reason, our insistence on being part of it.

“It was the first time that interactive media became something. You weren’t just sitting watching, you could comment. Shows like The Bachelor, you’re not really a part of it. You can’t comment live,” Forman explained. “A bit out of nowhere, we realized there was no meeting in front of an audience, and that would be pretty fun.”

Thus, UpDating was born. Berman and Forman joined forces as hosts of the innovative live dating show in September 2018. While the show’s format has evolved over time, the setup remains the same:

Forman and Berman choose two daters before the show, who are then blindfolded and interviewed onstage while their date stays in the Green Room. Still blindfolded, the pair reunite on stage for their literal blind date. The blindfolds then come off, and each relates separately to the crowd, before finding out what the other said. 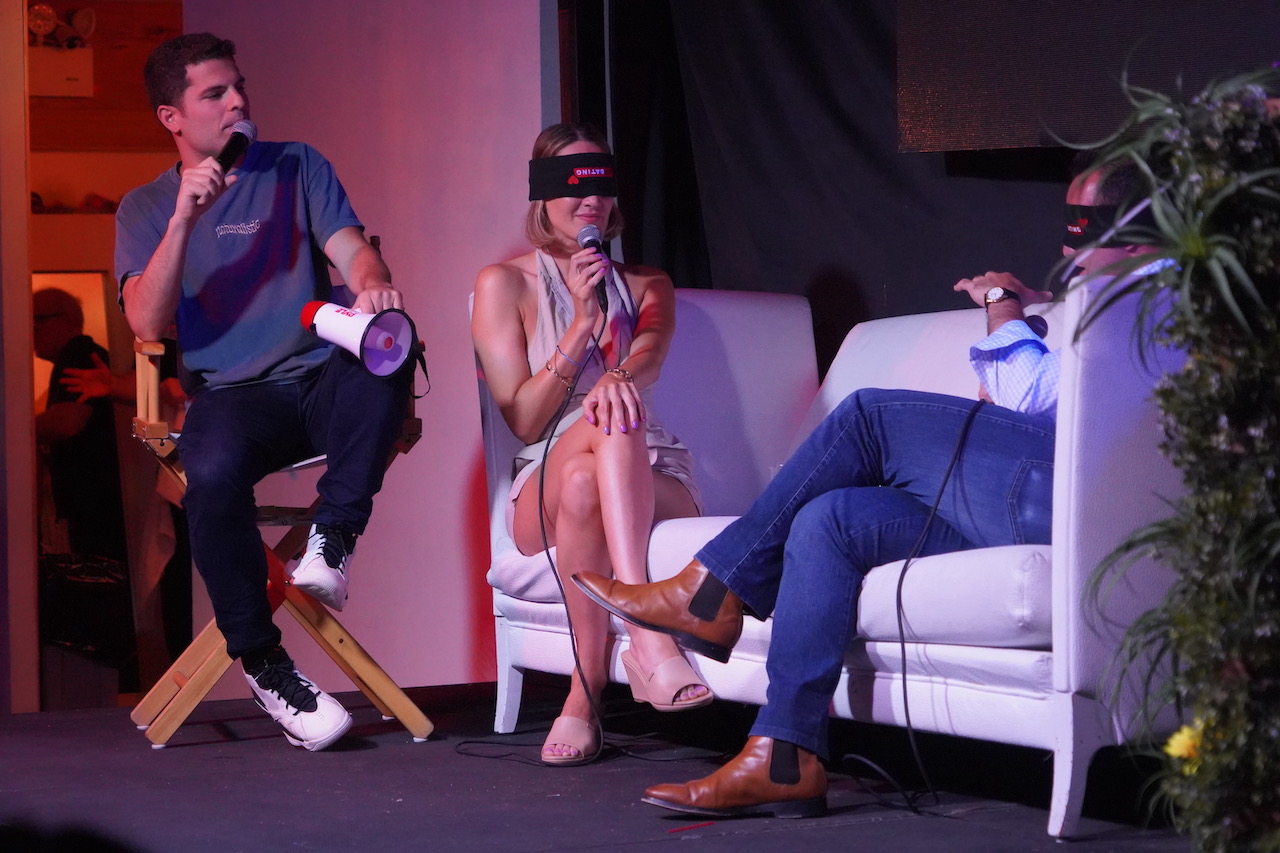 “The first time we did it was in the basement of a taqueria, full, 20 people laughing the whole time. I remember after that first show, we were like ‘there’s something here.’ And it gradually got better,” Forman said.

The duo have seemingly honed their 90-minute performance since that first show, moving to bigger venues and attracting a devoted New York fan base, some of whom have attended over 50 shows.

“It’s like a TV episode. You see a stand-up multiple times, they’ll do more or less the same number. UpDating is totally different every time,” Berman said.

Much of this can be attributed to the pair’s ability to adapt, take all the cards handed to them and play a role with it. They’ve added new components to the show over the years, like allowing crowd members to crash the date, adding to the pure chaos that’s totally entertaining. But although they have the power, Berman and Forman are far from in control. At the top of each show, they serve up a warning to the crowd: “This is real-time reality TV.” 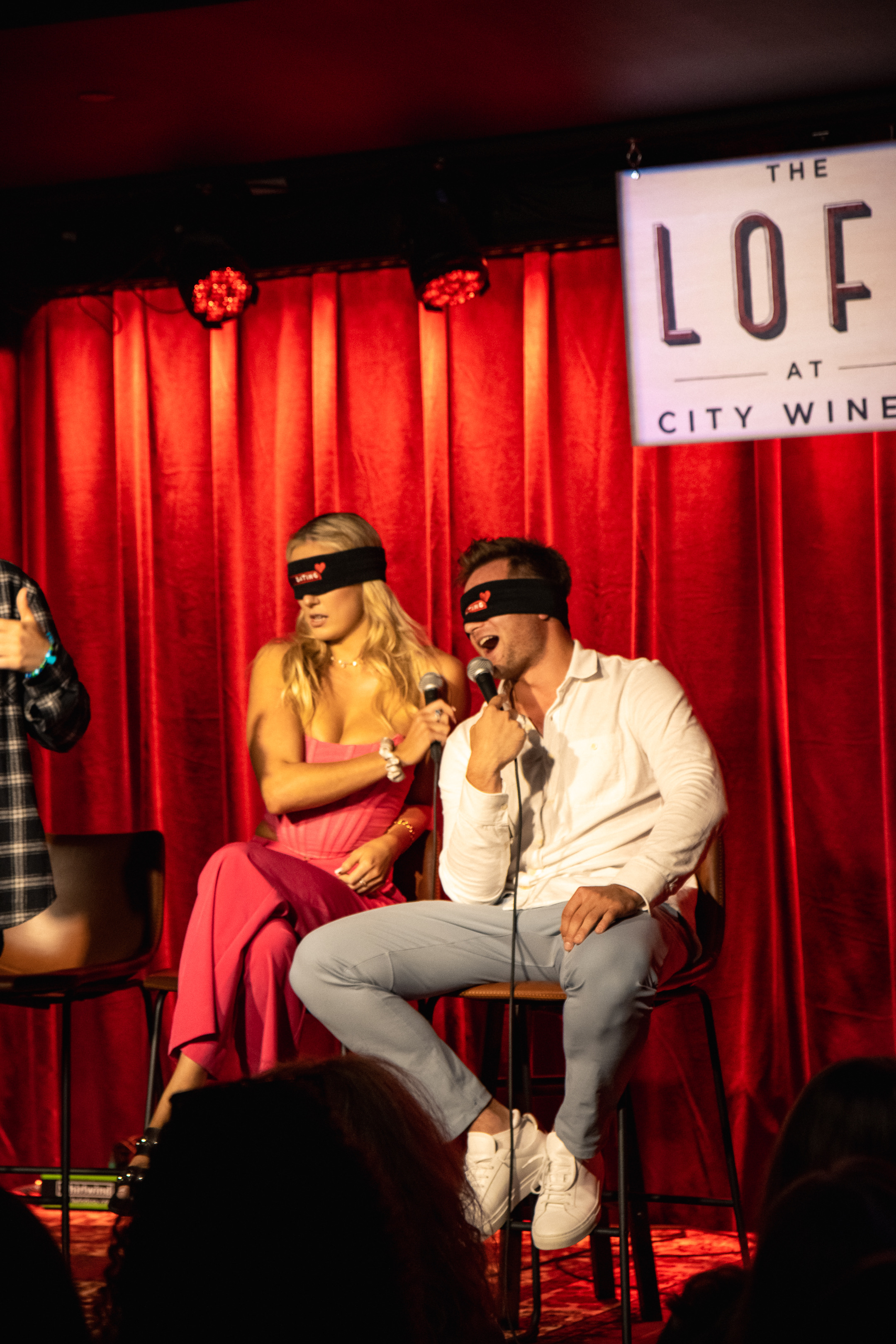 “With two people, you would really think they would get along. Then a minute into the show it’s like “fuck they hate each other”. We’ve done UpDating so many times, now we know our parts – ways to keep it fresh, to make it a 90 minute show. We have no idea what’s going to happen,” Forman said.

“I recognize myself as a performer. If someone got on stage and did a flip in the crowd, I would make it work,” Berman continued. “I like a heckler, well I don’t like a heckler, but I like watching a heckler. I like the awkwardness of the performer in dealing with that heckler. Harrison, on the other side, can fill the gaps. gaps that I don’t fill in, and he asks questions that the audience has that I don’t. It’s the combination of all those perfect things, just dissecting a date.

A smash hit in New York, UpDating hits the road, and Berman and Forman are eager to explore the dating scenes across the country.

“I’m personally very excited to see this in other cities because encounters are a little different everywhere. From a storytelling perspective, each city’s stories will be very different. That’s what’s going to make this show very exciting… We always wanted to be in Denver for this show, there’s just something about it.

“The dating is apparently very bad [in Denver]people seem to go out with the earth there,” Berman said. 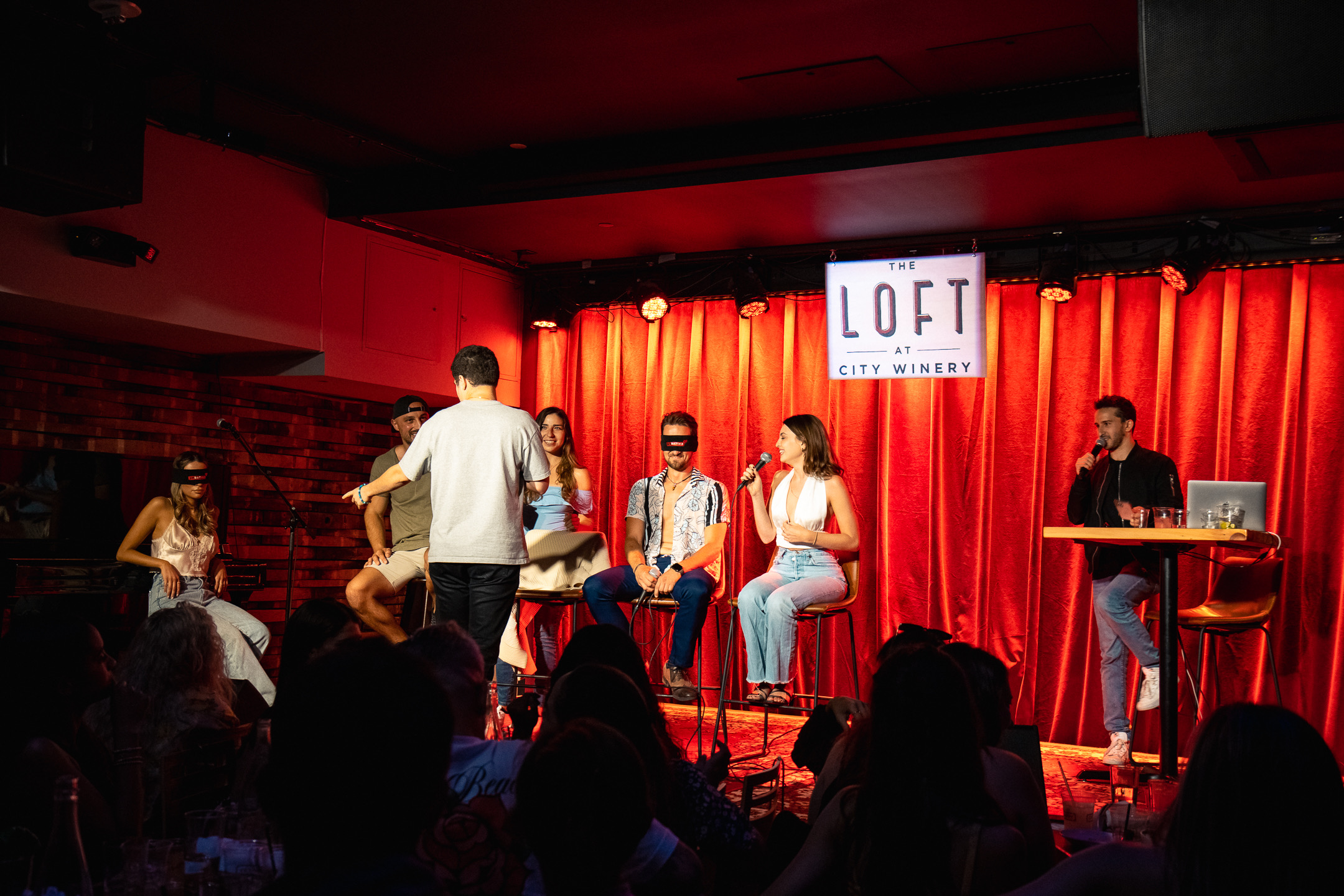 Consistently voted one of the worst cities in the country for dating, that pretty much sums it up. If you’ve ever tried to schedule a first date around a guy’s Thursday-Monday”I’m trying to reach 75 days on my Ikon” ski schedule, you will know what we mean. But if you’re looking for love in Mile High and want the rest of the city watching, UpDating is currently looking for Denver singles for the next show.

“We want fun people who don’t take themselves too seriously. That’s a huge part of it. You have to be silly, just have fun,” Forman explained.

If you think you might meet that special someone on the scene at Denver’s most notorious comedy club, you can apply for UpDating through their website, make a video using #castmeondating, or even slip into their DM.

“I would even say to be aggressive. DM us, hit our dating. Ultimately, the most persistent people end up on the show,” Berman said. 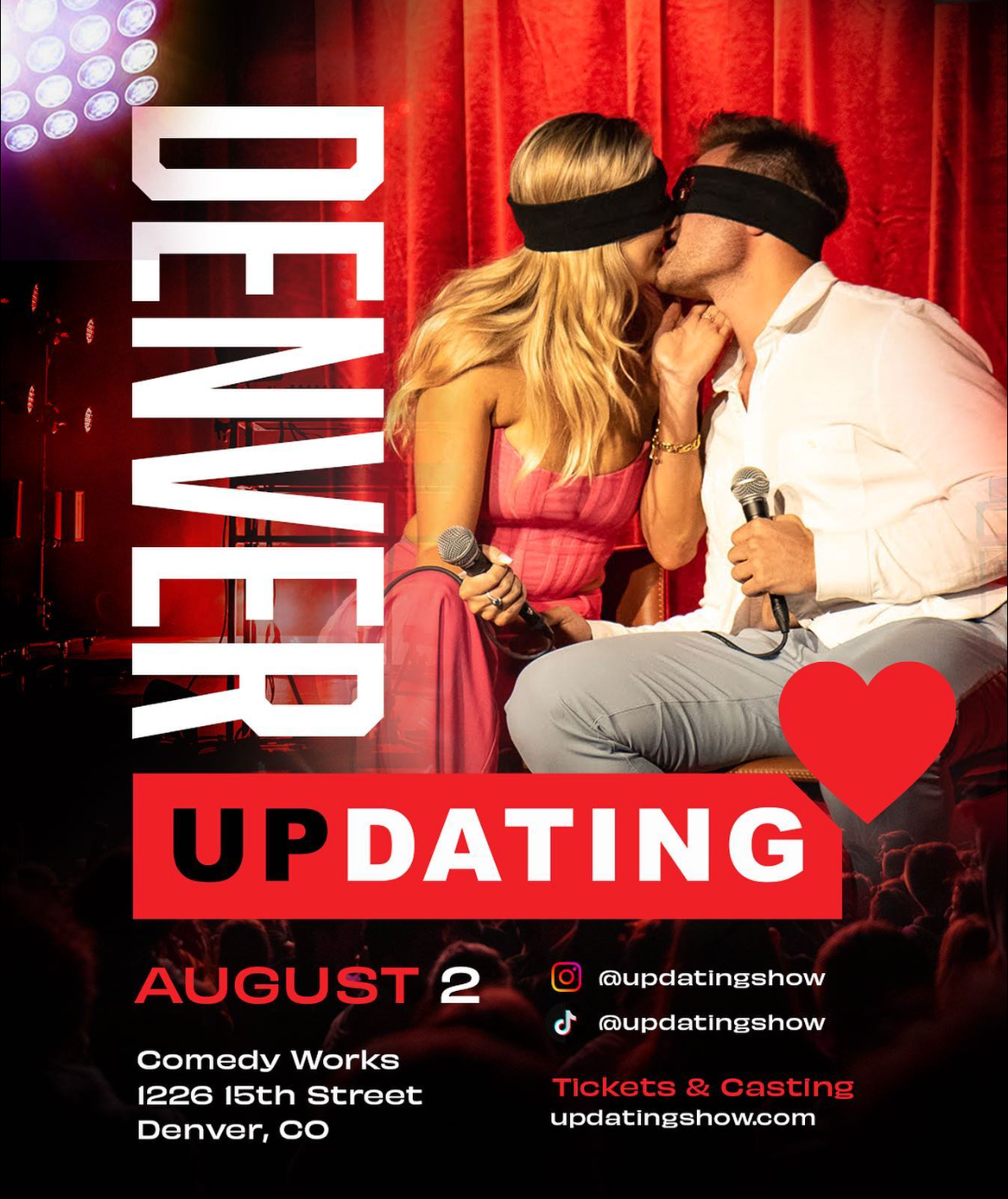 UpDating will arrive at Comedy Works Downtown on August 2. To apply for casting, visit their website. To see clips from previous shows, check them out on Instagram.

Summer is on the horizon, which means social distancing in our best bikinis, lit…

35 French fashion brands everyone should know

If you’re reading this, it’s time to moisturize and @hudabeauty will show you ho…

It Was All About J.Lo at the LuisaViaRoma x UNICEF Gala in Capri